eyes can send and receive many subtle messages.

Besides observing gross body postures and movements, the eyes can detect tiny changes in the bodies of others. Laboratory instrumentation has shown that some of these slight changes are detected at the subconscious level and affect blood flow related to sexual arousal. Here are some of the subtle changes the eyes can detect.
Changes in skin tone and texture due to blood flow changes when emotions fluctuate.
Changes in eye pupil size as interest peaks and wanes.
Tensioning and release of tiny muscles in the face and scalp from emotional changes.
Eye angle changes (even at a distance) as one diverts attention away or on something.
The precision timing of eye contact indicating interest, disinterest, or intimidation.

These slight body changes in others alert us to how they are feeling about us from moment to moment.
Eyes are important for mate selection.

Compared to the primates, only humans have a white area around the center colored portion of their eye. And even though the male eye is slightly larger than the female eye, the female eye has a higher proportion of white showing. Women interested in attracting men's attention will do well to use wide-eyed and darting eye movements to flash as much eye white area as often as possible. Men are attracted to that!

Men are attracted to young healthy women because they have the best success in producing healthy offspring. Bright, white areas in a woman's eyes plus long, thick eye lashes are excellent indicators of female good health. Women know how their eye contact can activate men's hormones and interest. Therefore women are very careful to avoid eye contact with men in public - unless the women want attention. If a woman wants attention from a man, she knows eye contact (plus a little smile) is one of the fastest ways to get it.

One of the important considerations for men choosing a mate is the female's age. Age difference is not as important to women, but men in all cultures prefer young women. Over eons this selection criteria by men has been to their advantage for producing the maximum number of healthy offspring. Young women have the least chromosome damage and therefore have the best chance in producing healthy babies.


The ears and nose continue to grow constantly as we age but the eye size remains nearly the same throughout life. Cartoonists know this and use it to make their characters appear young and appealing by drawing them with large eyes and small nose and ears. Women throughout history have also taken advantage of this fact and made themselves look younger by using makeup to increase the apparent size of their eyes. And for enough money, surgery can change the nose and ears to remove a decade or two. 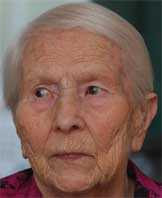 At the right is a woman with her 95 year old ears. (The rest of her is also 95!) Compare her ear size with the much younger woman above. Older woman who wish to appear as young as possible may want to wear their hair long to cover their ears!

Here is a flirting signal women often use during conversation with a man. As she speaks, she looks to her upper right side. This does two things. First, a large area of white is revealed indicating 'femaleness' and good health. Second, looking up to the right indicates she is thinking mental pictures about the FUTURE. That might raise his curiosity! He may wonder, "Is she picturing the same thing I am?" (Probably not!)

if she looks up to her left (your right), this indicates she is thinking mental pictures about the PAST. (Maybe she is recalling last night!)


These eye movement patterns are done naturally by nearly everyone who thinks with mental pictures. (Some small number of people think in sounds and some with feelings.) Of course if this looking up and to the right is an attention-getting flirting step, first it should be enhanced with an abundance of eye mascara, eye shadow and perfectly shaped healthy eye brows. This body language movement can greatly stimulate a man when done slowly and with a coy head tilt. It is an art form that the best flirters develop to a highly effective level.

Our eyes are very expressive and send many body language messages in numerous ways. For example:

Glistening eyes from extra tear duct secretion causes a twinkling and glittering look that indicates strong emotion. This could be either distress, short of crying or excitement such as passion, or triumph.


Narrowing the eyes deliberately indicates anguish and distaste and may be used by directing it to another who is the source of that feeling.


Glaring eyes are used to intimidate. This cue is also used by many animals. In males it may immediately trigger fight or flight responses accompanied with hormone release.


Unfocused eyes mean a person's mind is wandering and not paying attention. Literally, they are not focused!


Lowering the eyes indicates modesty or submission.This relates to the bow as a sign of respect to others or feeling of inferiority.
A wink with the closed eye directed at a person implies a shared secret. When winking at an opposite sex stranger it implies you have undisclosed desire for them.


Frequent blinking during conversation indicates high interest. Some women use a rapid flutter of their eyelashes to get a man's attention.


Use your eyes to send the right message.

Since the eyes are our most powerful body language message transmitters, here are some general rules about using your eyes:
It is OK to look into the eyes of another person for longer periods of time than normal when you:
Like or love them.
Are far apart and trying to improve communication.
Are deeply interested in what they are saying.
Know they are extroverted and like being close.
Are expecting an answer or response from someone.
Are trying to dominate and intimidate someone.

Because the eyes pass so much information to the brain each second, they are a powerful tool you can use to send powerful messages. One message you might want to send to someone you want to get intimate with is this: "I really want you to get closer to me emotionally and physically so much that I can't take my eyes off you." To send this message all you have to do is look into their eyes, with a soft gentle smile, and think that message silently while you hold the gaze. Yes, literally don't take your eyes off them! Now don't get too obnoxious! If they are not interested in you, they might call for help or tell you bluntly (and publically) to quit stalking them! However they may feel complimented by your interest in them, or think you have something to tell them like, "You have spinach in your teeth!" In any case they will be moved to speak to you to break the disconcerting gaze that they are not use to receiving.From here you are on your own to use your charm to get even closer.
[/color]